These apps, developed by Kotech Services Co., are exactly what's needed for anyone learning pinyin. 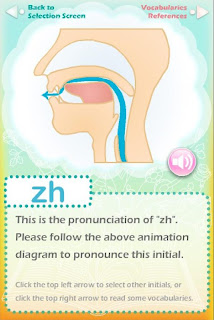 The first app, Learning Mandarin for Beginners, is an excellent program for teaching how to pronounce the pinyin sounds.  The user can select either an initial (beginning) or final (end) sound.  Then the viewer is taken to a screen that displays an video of how to produce the sound.  The video is an animated cross-section of the articulators (palates, lips, teeth, and tongue) so it is easy to see what is happening inside the mouth to make these Chinese sounds.  This is particularly important because often foreign language learners cannot hear differences in foreign sounds.  This app provides a visual context that allows the user to see how the sounds are produced differently.  Once foreign language learners can produce the difference in the sounds, they can begin to hear the difference in other speakers, which in turn allows for better comprehension during conversation.


As you navigate this app, pay particular attention to the positioning of the tongue in each video.  The slight differences between placement of the tip of the tongue is important.  For example, note if the tongue is placed behind the upper front teeth (as in the sound "s") or behind the lower front teeth (as in the sound "x").  The difference in placement is difficult to see, but it is there.  It would be nice if the developers would provide a written description of how the sound is pronounced to go with the animated video.  Until then, you can look here for access to more information about pronunciation. 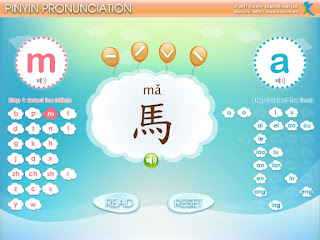 The second app, Pinyin Pronunciation HD, is the follow up guide to the first app.  In Pinyin Pronunciation HD, the user can quickly select a initial, final, & tone and then listen to the correct pronunciation.  Not only is the interface very easy to use (my 5 year old could do this), but this app only allows you to make legitimite initial-final-tone combinations.  This allows observant users to see the pattern of rules that create legal combinations of sounds.  For example, the user might observe that "q" can only be combined with finals that begin with the letters i or ü.

I recommend buying these apps together as they compliment each other very well.  I've looked for similar free resources online but have been disappointed with the interface as the resources online tend to be very clumsy.  These apps are definitely worth the 0.99¢ each app costs and will allow you to have access to them wherever you go as they don't require internet access to utilize the apps after downloading.
Posted by Panda Mom at Thursday, March 22, 2012
Email ThisBlogThis!Share to TwitterShare to FacebookShare to Pinterest
Labels: iPad App, Pinyin, Teaching Materials