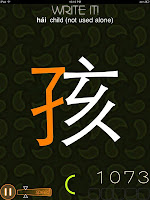 DON'T IGNORE THIS APP!
Chinese Writer is a wonderful app which integrates game and flashcard options to help young students remember stroke order, pronunciation, and meanings of characters. There are now over 5,000 (an update in Spring 2012 increased the available characters from 3,500) simplified/traditional Chinese characters from which you can make your own list to practice. An initial set of 43 simplified/traditional characters are free and then you have the option of purchasing further sets.

What drew me to this Chinese Writer (by trainchinese) is that it contains the radicals (the building blocks of Chinese characters). From this app, I created a list of specific characters/radicals that I wanted my children to focus on. They can practice the correct stroke order (the app lets them know if they write a stroke in the wrong order or in the wrong direction), listen to the correct Chinese pronunciation (or not if I turn the iPad to mute), and tell me the meaning (which scrolls across the top of the page).

The game is like Tetris in that Chinese characters "fall" down the page. The learner taps the character and then "traces" the correct stroke order over the outline of the character. He/she must complete the character before it reaches the bottom or it fills in one of the five boxes at the bottom of the app. When all five boxes are filled, the game is over. As the learner continues playing the speed of the character's fall increases (The user can control the initial speed on the settings page.). Randomly throughout the game, rockets appear that can be tapped for extra points. This really helps my 5-year old keep his attention on the game. He also likes trying to beat his best score.

For more advanced students, there is a "writing" mode within the game. If you select this game option, you won't see a character once you've taped the character.  You must pen it without help or the character will fill in one of the five boxes.

In flashcard mode, learners can practice the stroke order without being timed, hear the correct Chinese pronunciation, and read the corresponding English meaning. This is the part of the app that I use for my 3-year old since her fingers cannot move fast enough (yet!) to play the timed game.
Posted by Panda Mom at Sunday, October 02, 2011
Email ThisBlogThis!Share to TwitterShare to FacebookShare to Pinterest
Labels: Chinese Characters, Flashcards, iPad App, Numbers