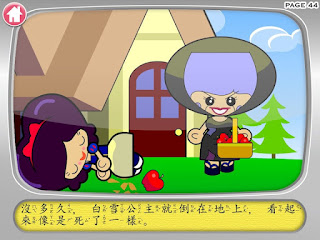 Wow!  I recommend any of the story apps by QLL (Quick Language Learning Inc. Ltd.).  The easiest way to find these apps is to visit the company's website (qll.co/pct) and then choose the type of app you need to download (iPad, iPhone, Android, etc).  There are usually some free stories and several that you can purchase.  Check back often as new stories become available!

Some of the apps use traditional characters along with 注音符號(ㄅㄆㄇㄈ); some of the stories use simplified characters.  So be sure to look at the description or the screenshots of the app in order to verify what is included.  In general, I have found that the iPad apps use traditional characters along with the ㄅㄆㄇㄈ; the iPhone apps use the simplified characters.  I presume this is due to the screen size and therefore is an attempt at making the characters easier to read on the smaller screens.  The company also produces apps for Androids, but I can't attest to those app functions.

Here's some more information about the iPad apps- What is great about these apps is that they were designed for kids learning 注音符號(ㄅㄆㄇㄈ).  In addition, you can control the language settings to control both the written text and the audio output.  Do you want English or Chinese text?  Do you want the story read to you in Chinese, English, or both?  Or would you rather there be no audio so that you can practice reading the characters yourself?  Yea!  Practical application of reading skills!  There are currently more than 30 stories produced by this company including:  Snow White, The Emperor’s New Clothes, The Frog Prince, and The Three Little Pigs).

I choose  "The Three Little Pigs" as my test run for several reasons:
If you would like to make your own hard copy of the book, you can do that easily on an iPad by creating your own screenshots.  Simply go to the page you want to take a picture of, then press the "Home Button" and the "On/Off Button" simultaneously; this will create a picture and store it in your photo library.  Then email the picture to yourself (I use the Facebook app to accomplish this) and paste the picture into a document you can print (like Microsoft Word).