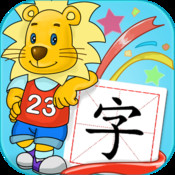 2kids学汉字- This app is worthy of mention. The instructions are all in Chinese but I didn't let that stop me from downloading this app- don't let it stop you! I've only had this app for a few days, but my four-year old keeps coming back to it. It has been wonderful at helping us to review characters she's seen already since it covers many common characters.  This app is aimed at children who already speak Mandarin and so the primary objective of this app is to teach them character recognition and writing (stroke order).  However, I've found it useful as an immersion tool for teaching character recognition in my kids (who are learning Chinese as a foreign language).

*There is a companion app by the same company called 2Kids学拼音.


General Organization- Each Unit covers 6-8 characters and most Units are taught across 2 Lessons.  Only one Lesson can be completed each day.  This helps to ensure that a child is retaining character recognition over time.

Specific Organization- The first Unit covers 6 characters: 大，小，人，口，上，and 下. The kids are introduced to pictures that correlate to each of the characters in the lesson. Then they are shown how to write the character using the correct stroke order. Next, much like in the popular TV show Dora and Diego, they help four story characters solve problems  by correctly identifying the target character from several choices. The graphics and animation is high quality.  Kids are rewarded with short animation clips, with virtual stickers, and by watching the story characters progress through the story. The makers of this app had young children in mind!

Update 1- Just bought the first extension (Content Package 1).  The characters covered and the incentives (digital stickers and animation clips) have expanded.  It appears there will be 6 simplified characters per Unit.  I'm still recommending this app even if you are teaching your children traditional characters because most people who read Chinese will need to recognize the simplified forms (which Mainland China primarily uses). Don't let learning two forms of the same character intimidate you. Often the two forms are very similar. Consider English and all the fonts a proficient reader must be able to navigate: two forms of lowercase 'a,' uppercase versus lowercase, cursive versus print, etc. As native speakers, we pick up these variations and accept them on the path to English literacy. Use this same concept to help your child become proficient in reading Chinese; expose them to variations!


Below is an example of how similar the simplified and traditional forms can be:
妈 --> 媽 ("mother")

Of course, not all of the characters will have such obvious similarities between the two fonts,
but give your child some credit.  If they are a native speaker, they've probably already figured out
that "soda/pop," "T.V./television," and "picture/photo" refer to the same thing.
只--> 隻 (a common Measure Word for animals)

Keep in mind that many Chinese characters look exactly the same in their simplified and traditional forms.
大-->大 ("big")

Update 2- The characters covered in each Content Package aren't revealed until the child has learned all of the previous Units.  So I can't post subsequent characters until my kids pass their lessons, but I'll try to post as I have access to them.  Future Units include the following simplified characters:

Update 3- I'm becoming more and more impressed with this program. Starting in Lesson 5, children are occasionally given a short story to read. My daughter was giddy with delight to realize she can now read a short story in Chinese.  Here is the "story."  The characters that aren't covered by the iPad app lessons have a speaker icon above them.  The kids can tap on those characters and the word is read for them. 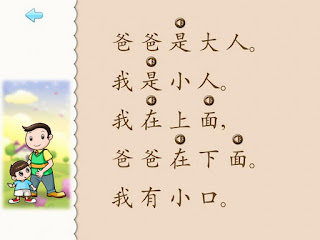 Update 4- This app is going on my top recommendation list!  Starting in Lesson 6, the user is asked to retain in memory a short sentence that uses the characters taught in this app.  The user is then suppose to arrange the characters in the same order as the sentence.  What a great way to practice listening skills! 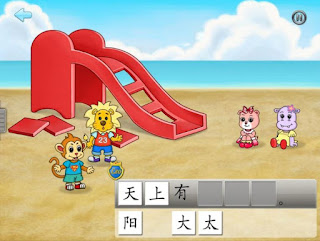 Comments-  My son has now completed all six of the currently available Content Packages.  So I've decided to make some comments about my observations.
Posted by Panda Mom at Saturday, December 31, 2011
Email ThisBlogThis!Share to TwitterShare to FacebookShare to Pinterest
Labels: Chinese Characters, iPad App, Opposites, Radicals